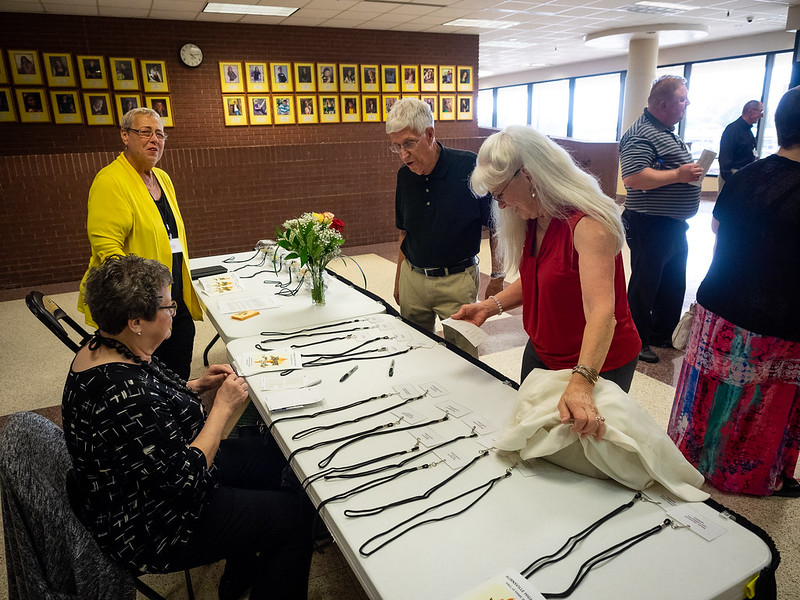 Six Burnsville High School graduates were inducted into the school’s Hall of Fame on Friday, Sept. 14, during a ceremony in the school’s Mraz Center. Inductees were also be recognized at halftime at the evening’s home football game.

They join 91 individuals, teams/organizations who have been inducted since the Hall of Fame was created in honor of the school’s 50th anniversary in 2006.

“Our six new inductees took the educational, artistic and athletic opportunities they enjoyed at Burnsville High School and built on them to become individuals who have made exceptional achievements in their careers as well as significant contributions to their communities at the local, state, national and international levels,” according to Vicki Roy, co-chair of the Hall of Fame committee. “They serve as positive role models for our students and let them see what opportunities they may have and what they may achieve in their futures.”

Anne Abicht, Class of 1977, was a member of the BHS girls' tennis team, the first girls' golf team, and the girls' basketball team that won the 1977 Class AA State Championship. She lettered in all three sports and was awarded a “reverse letter” for lettering at least six times during her high school career. She earned a bachelor's degree in mass communications with a minor in journalism from the University of Minnesota and her master's degree in sports management from St. Cloud State University. Abicht was the first, and so far only, female to be named the director of athletic media relations at St. Cloud State University, serving in that position for 30 years. She has received numerous awards including being inducted into the 2015 St. Cloud University Athletic Hall of Fame and the 2016 College Sports Information Directors of America Hall of Fame. Anne served as the U.S. Olympic Committee's press officer for the 1992 U.S. Olympic Men’s Hockey team in Albertville, France. She has served on the Central Minnesota Chapter of the American Red Cross Board of Directors from 1989-2009, chairing the board in 2005-2006. She is also a member of the Minnesota Sports Hall of Fame Selection Committee and is the secretary of the St. Cloud State Husky Booster Club. Abicht served as the media coordinator for the Minnesota North Star Games held in St. Cloud and Burnsville and on the Minnesota Special Olympics Opening Ceremony Organizing Committee when it took place in St. Cloud.

Dean LeBlanc, Class of 1988, was a member of the BHS Concert Band and the Jazz Ensemble. He was also a member of the Greater Twin Cities Youth Symphony and a winner of the Schubert Club Solo Competition in 1987 and 1988. He graduated with a special performer’s certificate from the Eastman School of Music and received a full scholarship to the Manhattan School of Music, earning a master’s degree in orchestral performance. LeBlanc was also a concerto competition winner at the Cleveland Institute of Music in 1992. LeBlanc is now a clarinetist with the Metropolitan Opera Orchestra where he has played over 2,000 performances, including numerous “Live from Lincoln Center” recordings and telecasts. He can be heard on two Grammy Award-winning Met recordings of “The Tempest” and “Der Ring des Nibelungen.” He was the solo clarinetist for the Oscar-winning movie “True Grit” and for the Emmy-winning HBO miniseries “Mildred Pierce.” He has appeared as a guest musician with the New York Philharmonic, Philadelphia Orchestra, Bavarian State Opera, Mostly Mozart Festival, Lincoln Center Festival, to name a few, and he has performed in Carnegie Hall over 100 times and many other major concert halls around the world.

Loren Miller, Class of 1982, was a member of the National Honor Society at BHS. He played on the soccer team and was a member of the cross country skiing team. He was also a member of the orienteering team that earned state championships in 1977 and 1978. He served as Dakota County president and state secretary and ambassador for the 4-H Youth Program. He earned his bachelor's degree in biology and his master's and Ph.D. in fisheries at the University of Minnesota. Miller is the first and only fish geneticist for the Minnesota Department of Natural Resources (DNR). He developed the first of a highly informative type of genetic marker for four fish species, has authored or co-authored many journal articles and made presentations at more than 60 scientific meetings and universities in 15 states and 4 other countries. Miller has received a University of Minnesota Star Professional Academic Award and a DNR Fisheries Award for Overall Excellence. He served as president and division and national committee member for the American Fisheries Society. Miller has made classroom presentations on fishery sciences in Minneapolis, Roseville and Faribault schools. He also developed an after school orienteering program for a Minneapolis school and has coached soccer, baseball, basketball and lacrosse. He volunteers at the Ordway, Great River Greening, Gibb’s Farm Museum and the American Swedish Institute.

Amy Nelson Plumb, Class of 1980, earned four letters in swimming at BHS and played the flute in the band. She was a member of the National Honor Society and received the faculty scholarship upon graduation. Nelson attended St. Olaf College where she earned her bachelor's degree in chemistry (magna cum laude). She was Phi Beta Kappa, a member of the Chemistry Honor Society and Senior Women’s Honor Society. She went on to the Mayo Medical School where she received her degree in 1988 and was named the Outstanding Female Medical Student. Nelson then proceeded to the University of Wisconsin, School of Medicine and Public Health where she was a pediatric resident and chief resident becoming a board certified pediatrician in 1992. She has received the Outstanding General Pediatrician Award and the Charles E. Lobeck Medical Education Award as well as numerous patient experience and patient quality awards. She has volunteered at West Middleton Elementary School and Middleton High School where she volunteered with the cross country, track and tennis teams as well as the orchestra. Nelson has also been an active volunteer with Cub Scouts and Boy Scouts, receiving the Order of the Arrow Service Award.

Jason Wellington Sticht, Class of 1990, was first chair trumpet in the BHS Concert Band from 1987-1989. He also served as the president of the Church Youth Group Association for two years. He earned his bachelor’s degree from the University of Minnesota and his master's with distinction from Embry-Riddle Aeronautical University. Sticht joined the Marines in 1991. He was designated a naval aviator in 1999 and has piloted six different military aircraft over the years, travelling to 49 countries and 46 states. He was selected for command in 2012, for bonus command in 2013 and completed command assignments in 2014 and 2017. Sticht was appointed chief of staff for the deputy assistant secretary of defense in 2017. He was awarded the Navy Achievement Medal in 2003, the Air Force Commendation Medal in 2006, the Navy Commendation Medal in 2007 and 2010 and Meritorious Service Medals in 2013, 2014 and 2017. He was also made an Honorary Chief Petty Officer in 2017. In addition to his 27 years of military service, Sticht has been an active volunteer in the communities in which he and his family have lived, serving as a senior military inspector for high school JROTC annual military inspections in New York and New Jersey. He has also served as a church fundraiser volunteer, a homeless shelter volunteer and a soccer coach.

Jeffrey K. Van Nest, Class of 1986, was senior class vice president at BHS. He played on the 1984 state runners up and 1985 state champion football teams, serving as co-captain his senior year. Van Nest attended the University of Minnesota, earning his bachelor's degree in 1990. He attended the University of Wisconsin School of Law where he received his juris doctor degree with honors in 1994. He earned a master of laws degree from Georgetown University Law Center. Van Nest served in the U.S. Navy Judge Advocate General’s Corps as a trial defense counsel in the Naval Legal Services Office West in San Francisco, and as appellate defense counsel for the Navy-Marine Corps Appellate Review in Washington, D.C., and operations attorney for the National Security Agency in Fort Meade. He served as unit chief of the Counterterrorism Division and as chief of the Genocide War Crimes Unit at the FBI Headquarters in Washington, D.C. Van Nest currently serves as the FBI Chief Division Counsel in the Minneapolis Division. He volunteers as the coordinator for the FBI Chasing the Dragon opioid awareness program and as a Ski Jammers youth ski coach.