Bowls for BrainPower fundraising event rescheduled to May 14

The 10th annual Bowls for BrainPower is moving online with a Best of Show silent auction event starting May 14 and running through May 23.

For more than two years, The Open Door food pantry has been distributing food at Hidden Valley and Edward Neill Elementary Schools every week during the school year.

END_OF_DOCUMENT_TOKEN_TO_BE_REPLACED 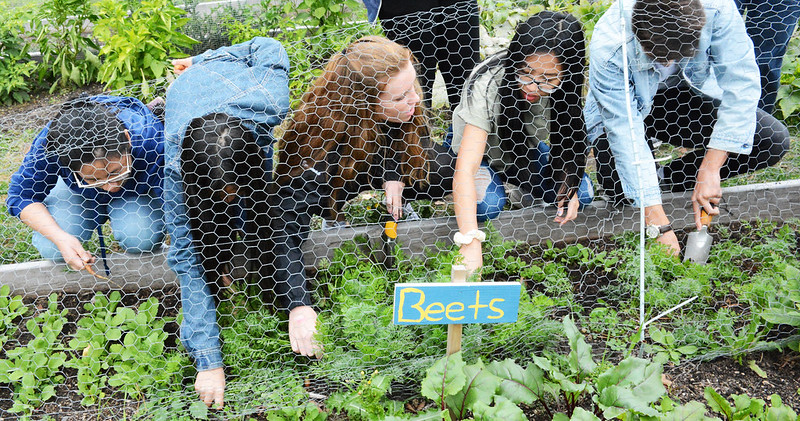 It’s been a productive year in the Giving Garden at Burnsville High School. Yellow squash and tomatoes did especially well. Kale and turnips were also plentiful and there were three crops of radishes. For the first time, carrots were grown to the delight of students.
The goal has been to harvest and donate 1,000 pounds of fruits and vegetables to the nearby food shelf at 360 Communities. In addition, some produce was used in Family and Consumer Science cooking classes at the school.
Language arts and culinary teacher Matt Deutsch is advisor for the group along with science teacher Lori Douglas and District 191 Community Education youth service coordinator Bri Ostoff.
“In our fourth year of the garden, we really made a lot of progress,” said Deutsch, a University of Minnesota Master Gardener. “We focused on planting new crops we hadn’t tried before, installed some raised beds, and sifted our first compost.”
Students volunteer on a drop-in basis and learn about growing food while they weed, water and harvest the 25 different fruits and vegetables grown in the garden. Then they weigh what’s been picked, and the produce goes directly to the food shelf. The total is approaching 1,000 pounds, so this year’s goal might be met since there are some big pumpkins and squash still growing in the garden.
More than 100 students, staff and community members have volunteered nearly 400 hours in the garden during this growing season.
The Giving Garden is made possible through generous donations from Foundation 191, the Whole Kids Foundation, Valley Natural Foods and community members. Visit the garden’s website at www.isd191.org/bhs-giving-garden to learn more about it.
Categories:
Community
Tags:
bhs, giving garden, harvest, 360 communities, youth service
Posted: Tuesday, October 10, 2017 - 13:22