Burnsville High School and Burnsville Alternative High School students combined to earn 870 credits worth more than $464,000 in tuition through the University of Minnesota’s College in the Schools (CIS) program during the 2019-20 school year.

How are we doing activities: Speech, Debate teams still going strong in the midst of COVID-19

This year has been a challenge for everyone, requiring a great deal of flexibility, strength and creativity in order to be successful this school year.

END_OF_DOCUMENT_TOKEN_TO_BE_REPLACED 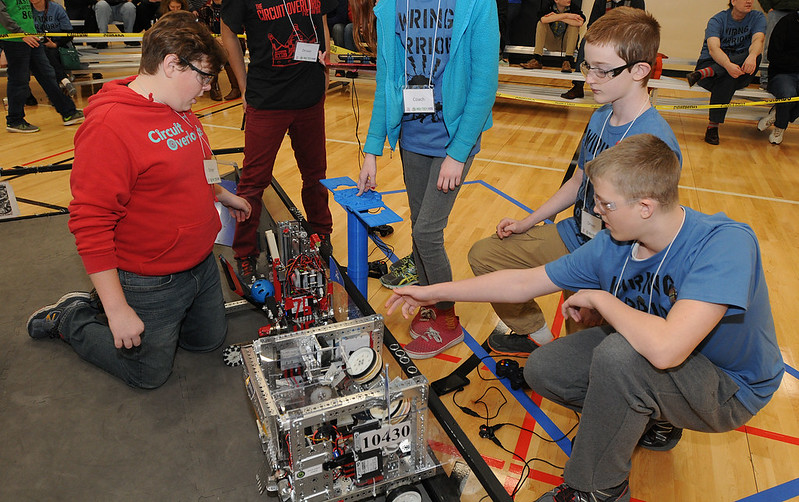 Forty-eight teams from around the state participated in a two-day robotics qualifying tournament of FIRST® Tech Challenge in MN (MN FTC) hosted by Burnsville-Eagan-Savage School District 191 in the new activities center at Burnsville High School (BHS) on Dec. 10 and 11.

MN FTC is part of an international robotics program that includes more than 3,000 teams globally. The program involves teams of up to 15 students in grades 6-12 building and programming a robot that competes on a 12’ by 12’ field. The challenge is new each year and is designed to get students thinking critically and expanding their knowledge of the engineering process.

District 191 has the second largest MN FTC program in the state with Burnsville High School and all three middle schools participating.

As a result of their tournament performance, two teams in District 191 earned invitations to the Minnesota State FTC Robotics tournament in February. FTC 7588, named "The PRIDE," a fourth-year team out of Metcalf Middle School and BHS, won the Promote Award as well as the Connect Award. They were also recognized as the 1st runner up for Inspire Award, the highest award given in the Sunday tournament. The PRIDE was also selected to be part of the 1st ranked alliance for elimination rounds, which went on to win the Sunday tournament.

Also heading to state competition will be FTC 10590, named "Monkey Wrench Gang," a second-year team out of Metcalf Middle School. The team won the Control Award, as well as earning the right to form and lead the 1st ranked alliance for eliminations by finishing the qualification round as the top ranked team, going undefeated during qualifers, with their alliance winning the Sunday tournament.

FTC 10423, team name "Servo Pros," a second-year team out of Burnsville High School, won the Motivate Award in Sunday's tournament. They were also selected to be part of the 2nd ranked alliance for the elimination rounds, but were eliminated in the semi-finals.

FTC 10648, named “I Have An Idea,” a second-year team of students from around the district, won the Motivate Award in Saturday’s tournament.

Craig Huber is the president of the Burnsville Robotics Booster Club that hosted the tournament and he's a mentor for all eight teams in District 191. Heather Walberg is the school district FTC Coordinator. All teams are coached and mentored by volunteers that include parents and community members.

For more information, go to www.hightechkids.org/mn-first-tech-challenge-grades-7-12.